The man behind BAR+NO IDEA, the cozy little establishment in Rokkomich where locals seek refuge over drams and Othello is back. This time bigger than one could imagine in terms of selection and creativity. Ishida-san, popular for his friendliness and humor, last month opened up his third enterprise in yet again Rokkomichi and minutes from the old place. This time around he has successfully introduced a selection of food at his new venue that includes Kushikatsu and Oden. Surprisingly enough these types of foods, which generally are suited to beer, go well with his imaginative selection of Japanese whisky that the old venue lacked.

The new establishment is unbelievably cheap and stylish with the majority of Scotch and Japanese whisky ranging between 500~700 yen per 30ml serve. The reasoning behind the affordability, which in my opinion is the cheapest place in Kansai to have a dram, is that the establishment is marketed as a tachinomi, literally a stand up bar. Although a tachinomi usually consists of the standard alcohol beverage list and associated snacks, which this place does, the main emphasis is on whisky and Kushikatsu that seems to work well believe it or not.

Besides the astronomical cheap whisky prices, this new concept food and whisky bar has daily specials such as the One Coin set that includes a draft beer and two fried skewers of your choice. Opened from 2:00pm, with no cover charge, which is a blessing for local residents, happy hour starts from 3:00pm and finishes at 5:00pm. Outside of happy hour everything is amazingly cheap if you cannot make it between those times. The malt selection may change over time but in any conciliation there will be something pleasing for everyone. This is well worth the minimal effort to visit this place. The liquor chain Yamaya is within walking distance so make the most of it while in Rokkomichi, Kobe. 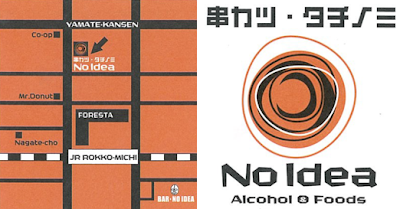