"Hokuto" was created and named accordingly to commemorate the birth of Hokuto city in the Yamanishi prefecture. The vatting, which consists of a variety of key malts from the Hakushu distillery as well as Yamazaki genshu malt was released on June 22, 2004. The 12yo pure malt vatting that adopted the "bamboo charcoal filtration" method was the result of Suntory's pursuit to create an "easy to drink" whisky. Interestingly, the Hokuto pure malt was at times marketed as an alternative to Sochu with certain catch copy saying: "Clear, tasty, and refined - allowing you to shift from Sochu to whisky". Among other promotions Suntory suggested that this pure malt was designed to be drank with ice - specifically 'half rock'. This I'd not recommend as this whisky is initially mellow, watering it down completely drowns it. The Hokuto 12yo pure malt came in two distinctive label variations (releases) before it was sadly put out of production in 2010. The first release (left image) in 2004 pictured lush forestry that I presume is either the surroundings of the Hakushu distillery and/or the city of Hokuto. This release is labeled as Suntory Pure Malt Whisky (top of label) with Hokuto written in quotations (bottom of label), and bottled by Suntory limited. The second label variation (right image) drops the wording 'Suntory' out of 'Pure Malt Whisky' (top of label), and moves the brand name of Hokuto towards to top without the quotations. Besides these small difference on the second release that accordingly was put out in  2005, the obvious change is the label's image that clearly depicts the Hakushu distillery and surrounding forest in the foreground of rolling hills in Hokuto, and what looks like to be the area's wheat silos? Also, in 2005 a quarter bottle (250ml) hit the market. Now...any difference taste wise?

Taste: Lush. Smooth and silky with gorgeous oak, a dash of concentrated lime juice, and a drop of pineapple juice from a can. The whipped cream makes itself present before spiced mixed nuts roll into the equation. The malt becomes very creamy the longer it sits.

Finish: Dry, tame, and oaky, and like the first release medium in length.

Comment: Although a mass marketed line-up of Suntory at the time, it is now ever so scarce due to its popularity, and effectively cheap price for excellent quality. It originally took me months and months to find my first bottle (second release), followed with the first release. Now I can never stop finding them. This Pure Malt ticks all the right boxes, it offers something different to Suntory’s core Yamazaki and Hakushu single malts.

To conclude, both versions retain a clean-cut, fresh, mellow citrus presentation. Both versions are very similar. However, the second release in my opinion has a sweater top note (creamy) on the nose, and is slightly more richer than the first release (only by a point or two). At the same time the first release has a slightly more sumptuous mouthfeel (again, only by a point or two). At the end of the day there are only very subtle differences. Both versions are of exceptional quality with great blending - a must have for every drinker.
Posted by - Clint A at 12:42 PM 1 comment: 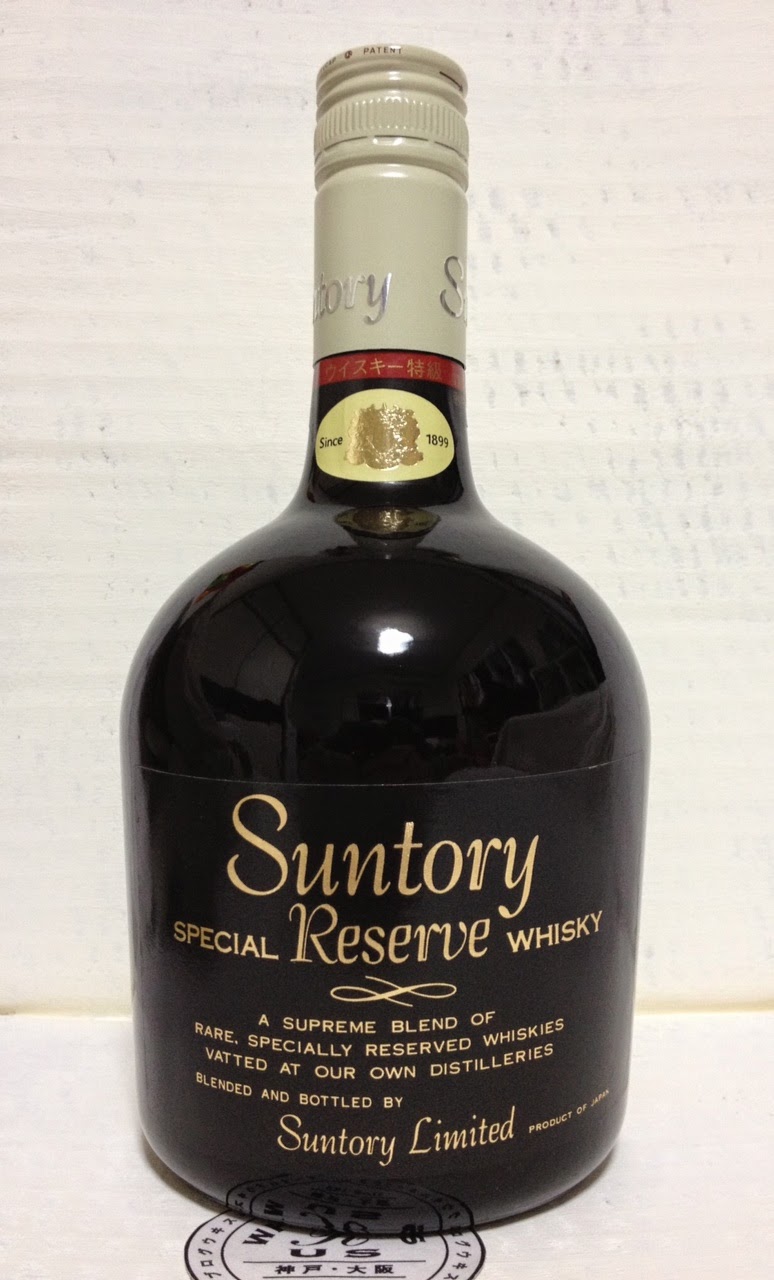 Suntory Special Reserve was launched in 1969 to commemorate Suntory's 70th anniversary. The original and earlier batches display the 70th anniversary insignia that is embossed in the glass at the back of the bottle. Like most bottles of whisky you can distinguish the era of release by taking notice of the label. In the case of the Special Reserve expression, bottles from the mid 70s were labeled "A Rare Blend", while 80s batches were labeled with "A Supreme Blend". Furthermore, certain releases have additional information to pinpoint a specific year, like the red stripe below the tin capsule and above the Suntory crest in the picture above. This (according to research) apparently indicates the bottle I bought was a batch from 1986. Currently the malt used in today's Special Reserve is Hakushu key malt that has been matured in white oak, in my personal opinion this was not the case back in the 70s as my bottle shows very strong evidence of sherry maturation in colour, aroma, and taste respectively.

Nose: Delicate, moderately rich sherry - no mistake here! The tiniest hints of grain is immediately overcome with again, quality, tame, cream sherry. Assorted fruits are at the leading edge (dried figs, apricots, Australian plums, and evidence of underripe nectarine). It continues to roll with a fruity peach sauce, Muscovado, and mellow coffee toffee. Pleasantly oaky. On the artificial sweet front you get red jellies and Werther's soft cream caramels. There's an interesting soy berry marinade and cranberry sauce going on. Tilt the glass at certain angles (with your nose encased) and you'll get a dose of scones saturated in lightly salted butter, and quality honey. Water accentuates a mildly tangy orange, which was really always there. What lovely assorted aromas.

Taste: Moderately spiced honey-soy marinade. Dry sherry. Very oaky. Muscovado. Burnt toffee, and spicy cheery coconut. Bitter-sweet orange with cocoa. I also detect suggestions of espresso. The grain is much more evident on the palate compared to the nose however, it carries itself well on the tongue with a peppery butter mouthfeel. Along with all pleasantries there is an interesting vegetal note - my thoughts are stir-fry Zucchini.

Finish: Moderate to reasonably long with a combination of bitter sweetness (cocoa soufflé with orange).

Comment: I can picture salary men at the time possibly slugging this back with copious amounts of water added for their Mizuwari. I'm all for the policy of 'drink it how you like', but this blend is too good to think it was drank in any other way than neat. My new 'Daily Dram'. Lovely blending with evident cask and malt quality at the time. 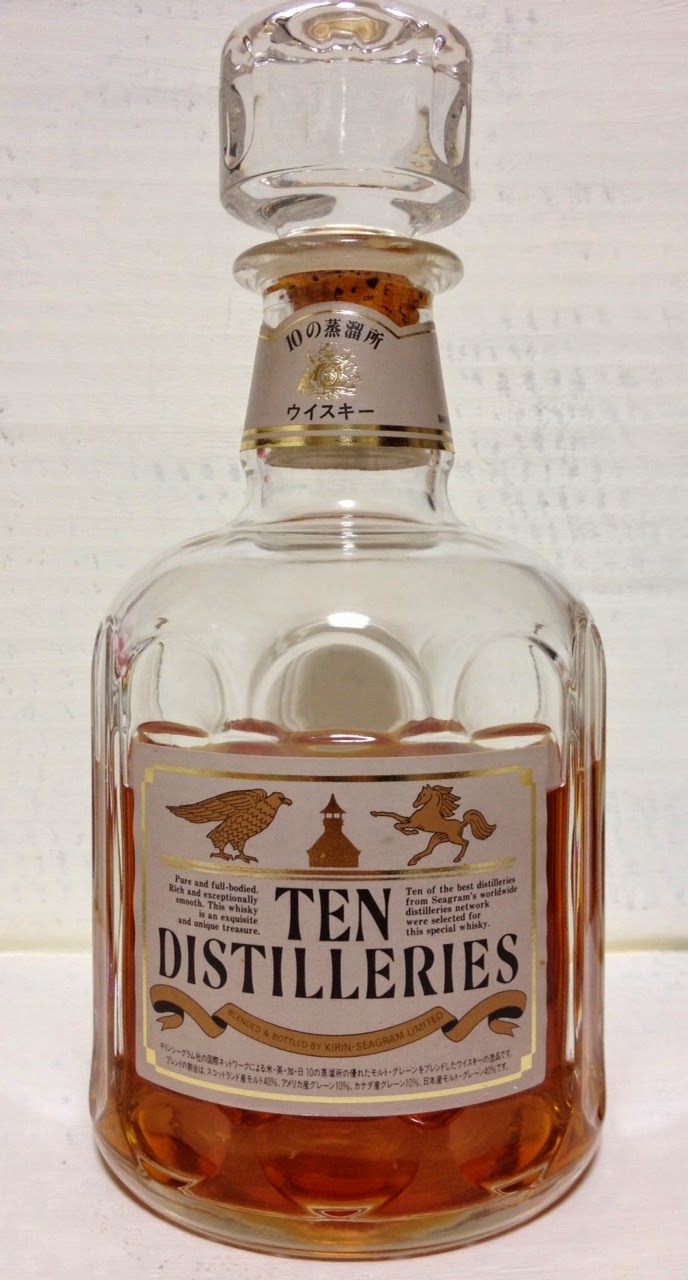 Ten prominent distilleries from Kirin-Seagram's portfolio at the time were selected for this blended whisky that was produced in 1989. The component whiskies consists of malt from Scotland (40%), American grain (10%), Canadian grain (10%), and naturally malt and grain from Kirin-Japan (40%). Aside from Fujigotemba, the roundup of distilleries were composed of Strathisla, Glen Grant, Longmorn, Glen Keith, and Allt A Bhainne from Scotland. Canadian grain came from Waterloo, Lasalle, and Gimli, while the Lawrenceburg grain distillery represented America.

Nose: Initially some dusty woody elements (wooden lettuce crates, tree bark, and almond shells). It has a damp and musty scent going on (wet towels left over night) but this gives way to reasonably pleasant aromas such as lychee, mellow Sakura tea leaves, dried mango, and vanilla poached pear. In addition there is light Splice pine-lime (creamy vanilla ice cream encased in citrus fruit flavoured ice) and watermelon. A detection of Gudang Garam cigarettes? A slight alcohol and grainy note rolls of the top. Time reveals mint, musk lifesavers, and tomato leaves followed by flat cola dregs that has been left in the fridge for days. Overall it's not too bad really...just a little too light however, it attains a great summery nose.

Taste: Not as active as the nose, although certainly not a write-off. In no particular order you get cherry leaf, and spicy rocky road chocolate. Then, mild menthol gum and dusty musk candy. Moss and watermelon skin white rind are present. A tad on the light side but very solid on subtle spices and mild bitter herbs. Corn kernels and vanilla bean paste. Hoppy really.

Comment: Great bottle design and history behind this blend. Some may find it bland, and well, yes, it can be to an extent, but if you can obtain it at a very cheap price, and have an open mind, it should be considered for the historical experience. Better still, if your not sure on a bottle purchase order it at a bar.
Posted by - Clint A at 5:01 PM No comments: