Nose: Rich and juicy apricots half dipped in smooth, rich white chocolate. A combo of fragrant wood spice, malty with cereals (puffed wheat with a sprinkling of brown sugar). New Zealand Hokey Pokey ice cream - vanilla with small, solid lumps of honeycomb toffee. There is aromas of sweet cigar boxes and oddly concentrated lime syrup (like milkshakes), which I've never picked up in a Nikka before. Seductive oak? Yep!

Taste: Fair to say the palate is creamy, briefly, then lots of wood-spice, much more prominent here than the nose. Some pickled ginger and/or cardamon follow before mid-palate becomes dry with espresso and/or ash baked potato skins. The apricots are still present on the last run but this time dried. Slightly nutty presence that was ever so shy on the nose if any.

Comment: Different from cask 407512 for obvious reasons, however I was suprised this cask is quite on the sweet side compared to the strong and heavy earthy aromas experienced before. Either way I've enjoyed every genshu single cask Yoichi 10-yo, can't say the same for the 5-yo unfortunately, and as for the 20-yo that is yet to come. The 20-yo Miyagikyo though was a right stunner. Must visit Yoichi again, need to invest in a few of these little fellas to keep the cabinet from drying up. 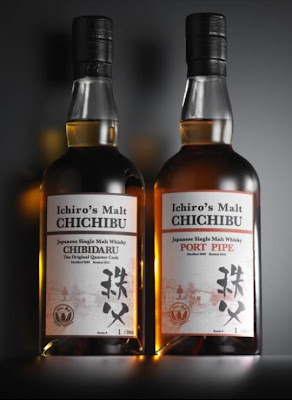 The moment many of us have been waiting for has finally been put into action. This morning, March 25, Akuto-san announced the release of two new Chichibu expressions to the portfolio of the distillery – Ichiro’s Malt Chibidaru (original quarter cask): outturn of 3,900 bottles and bottled at 53.5% abv, and the Port Pipe: outturn of 4,200 and bottled at 54.5% abv. These are very welcoming follow-ups to the distillery’s first three expressions (The First, The Floor Malted, and The Peated), and the beginning of this this year’s flourishment of new bottlings.
It is not official as to when these cask strength expressions will become available, however Akuto-san informs us it will not be too long and preparations are in action to get them out quick (I expect sometime April – could be wrong obviously). The retail price of both expressions, which were distilled in 2009 and bottled in 2013 will be on par with The Peated and The Floor Malted – going for 8,500 yen respectively (excluding tax).
The official bottlings of the Chibidaru and Port Pipe, although new, have been available in the past such as Shinanoya’s fifth anniversary private bottling and LMDW’s private bottling, as well as Sanyou Bussan’s Port Pipe private bottling (also, let’s not forget the prototypes at the distillery and various festivals), but these official distillery bottlings hold much more significance in my opinion. Expect these to go reasonably quick, like most bottlings these days, but especially these bearing the notion of “official bottlings” with a lesser outturn compared to its siblings – so get your order in. Stay tuned for more news and reviews in time to come.
Posted by - Clint A at 1:07 PM 6 comments:

First New Black Nikka Launch in Over a Decade

Nikka fans will be delighted to learn of a new Nikka expression that will hit the shelves March 26 - and it is not the Taketsuru 12-year-old Sherry Wood that Whiskies R Us previously reported. However, sherry is involved, which should make Nikka's new expression standout among the Nikka aficionados. The new release is limited to Japan and will not be debuting internationally. The new edition to their portfolio - "Black Nikka Rich Blend" is a marriage of key Genshu malt matured in sherry casks and married with Nikka's Coffey grain whisky. Two sizes will be available in both 700ml and 180ml with an ABV of 40 percent (without an age statement). Nikka (Asahi) states the blend is soft and sweet with gorgeous fruity aromas allowing for a full-bodied, smooth mouthfeel. The release is the first new Nikka Black product in eleven years as part of Nikka's goal in boosting domestic whisky sales, and for the growing popularity of highballs. The midrange iconic brand and new blend will be priced around 1,300 yen. For a detailed review from Whiskies R Us take a look here.

Image borrowed kindly from Nikka's Homapage
Posted by - Clint A at 2:49 PM 2 comments: 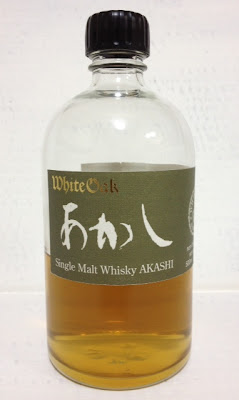 Nose: Distinctly Akashi malt. At 6 months it still carries over the aromas described in the first review. However, there are notable and pleasant changes that break away from the burnt rubber, which I must add has become very subtle over time. Interesting new aromas include: freshly ironed shirts (which I strangely like), skewed grilled Ginkgo nuts, maple/honey sap, and fragrant ferns. Fair to say sweeter pushing away almost all solvents - there is still a heavy duty masking  tape aroma present. Diluted with a bit of time adds rock melon... or is it honey dew?

Taste: The burnt rubber tyre smoke is here to stay, but it has grown on me and has become mild and very acceptable. Grilled Ginkgo nuts are also on the palate sprinkled lightly with pepper. The honey, which I reported initially has become more distinguished; sweeter - moving from red gum to costal floral honey. Water adds greenery in both plant and veg.

Last comment: Not a dramatic change but enough to enjoy it on another level than when initially cracking it back in September 2012. Arguably sweeter with new hidden aromas and complex, but still can't seem to find a decent balance. However, it's a very affordable experience (in Japan). Although much more satisfied this time around this was my first and most likely last bottle purchase of the Akashi no-age-statement. Lets see how the Akashi Single Bourbon Cask pulls-up. These guys are doing their bit for the industry - it can only get better.
Reviewed by Clint A
Posted by - Clint A at 2:26 PM 3 comments:

Comment: Regulars of Whiskies R Us know I don't give a score when reviewing, for various reasons, however, if I were forced to give this sexy malt a score I'd most likely give it a high one. The nose is... again sexy, the palate is lush also but the nose alone cranks up the points. I experimented with two forms of glass styles on various occasions and I found the Hakushu Sherry Cask 2013 expression to be more prominent in a short stemware glass than my everyday Glencairn which I use. Now I've got the challenge to track down another bottle - as of writing I've consumed half a bottle.

Finish: Pretty consistent with the palate in my opinion - moderate but cheekily lingering with an extra touch of that toasted oak and cool mint Listerine, or is it PK chewing gum?

Comment: I quite enjoyed this. I've tried it on a few occasions but finally parted with my own money and secured a bottle. I've been looking for something a bit different of late and this cracker of a 3 year-old has done it for me. I'm confident, like many of Ichiro's bottlings, the aromas and flavour profile will change over time - most likely becoming greater.

Reviewed by Clint A 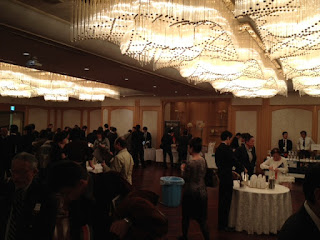 The 40th NBA (Nippon Bartenders Association) "Cocktail Competition" in Osaka took place on February 24,  at the Argo Hotel in Sakai City. Emphasis on the event is pretty self explanatory - who could make the best bar cocktails. Specialists from various famed bars throughout Kansai: Osaka, Kobe, Kyoto, Nara, and Wakayama went head to head on the day. The annual event had a total of 16 mixologists strutting their stuff and naturally competing against one another to see who would be crowned the NBA "Cocktail Champion".

Very interesting stuff, and well done to all the entrants, however, I was not there to primarily watch the cocktail action - I was there for the 30 some what stalls, brands, and makers in the adjacent room, which were exhibiting what is currently on offer and what will become on offer in the spirits world.

Besides the abundance of lustful Scotch and fancy assorted spirits there was not a lot on offer on the domestic spirit front. In fact at this NBA event, which strays away from your typical whisky festival, Nikka were the only players to show their face - with something well worth mentioning: Taketsuru 12-year-old "Sherry Wood Finish". Not completely new as this interesting  whisky debuted at the "Ginza x Taketsuru Night" in 2012. It may have made an appearance on the night but it never made it on the shelf for consumers and it is yet to do so, but this is all about to change.

According to Nikka (Asahi) brand ambassador this 43% ABV Sherry Wood expresion will be joining Nikka's portfolio permanently mid-year (2013). The reasonably interesting new expresion to the line-up, with evident (obvious) dry sherry on both the palate and nose, was finished  for roughly one year in the Sherry Cask (unfortunately I did not confirm whether it was a first or second-fill butt). The price will naturally be more expensive than the standard Taketsuru 12-year-old, however, according to the big guns it will not break the bank and most likely will have an increase of 1,000 yen. In my opinion this is justifiable and will satisfy all hardcore Nikka  fans. Stay tuned for more news to come when it presents itself.
Posted by - Clint A at 5:14 PM 8 comments: