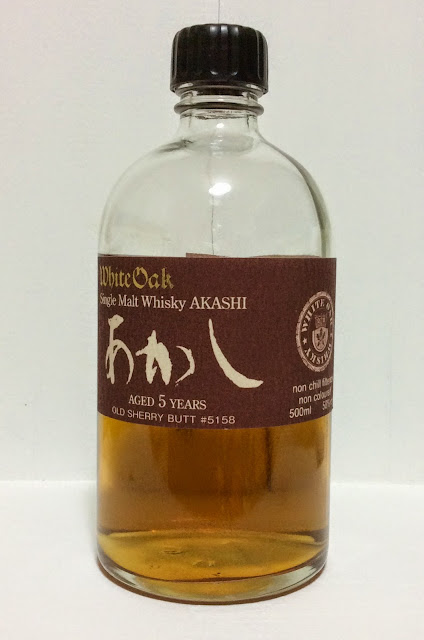 Nose: Besides the obvious fact that this is a relatively young malt to begin with, it retains a dominant young-sweetness resembling new make elements, despite that it is 5yo, and more so than other young malts on the market. Nevertheless, pleasant enough if you enjoy that sort of thing. Past the delinquency you get under ripe stewed rhubarb, floral soapiness, mild apple juice, straw, red icy poles, light honey, plus the tinniest hint of what seems to be PX on the nose. It is however a bit spirity. Perhaps a very tired butt? In my opinion it contains the softest touch of that typical burnt rubber that I believe is very consistent in all Akashi releases - house style perhaps? Not a lot changes really with the addition of water. It kind of lacks the freshness of a good calibre sherry cask.

Taste: Mild pickled ginger, cloves, cinnamon and baked apple. As with the nose some floral elements, ever eaten a pink carnation? Pomergranate juice. Fruity honey wine.The tyre rubber is also here to stay - in a mild way, which I must say I don't mind at all. A tad of what I presume to be PX influence - only watery. Under ripe fresh rhubarb sticks. Then, peppered green vegetables - mid way bitterness – can’t stop thinking of Brussels sprouts? From here it goes a bit pear shaped with dryness and chalkiness. Water tones down this - slightly.

Finish: Initially prickly and spicy before becoming chalky and dry.

Comment: As you can see by the photo I've played with this malt on various occasions but it never really seems to change, it stays consistent from opening the bottle to finishing it. Not the best from the stable, still, the nose was fun enough I give it that.
Posted by - Clint A at 10:46 PM 2 comments: