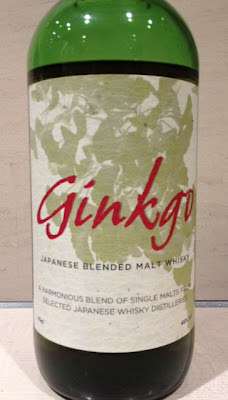 Taste: Delicious. An avalanche of initial spice: pickled white ginger, followed by yet again citrus delivery. The addition of water brings out a mixture of brown sugar mixed with butter. A rich floral mouthfeel is also unleashed.

Comment: Others have detected subtle smoke in both the nose and taste. It is slightly present, but I struggled to find it (if any at all) and associate it with something. This is a well-crafted blend of single malts from selected Japanese distilleries, a rarity, blended and bottled by Ichiro-san. I will be making it my mission to try and hunt down another bottle of this seemingly hard to find whisky. The majority of on-line websites (well, the sites I often check) have sold out long ago, since it’s a discontinued bottling. A release of 6,000 bottles was released with half going to the international market. This was pleasant and smooth enough on a warm evening, with a breeze of course. 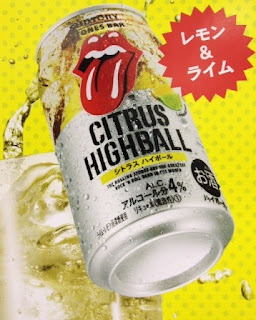 Alcoholic beverage companies in often embark on limited edition themed drinks to welcome the four seasons of the year. For the official beginning of summer (the rainy season), the tradition brought the release of a diverse range of quirky canned grog to compliment the existing range, including that of Suntory’s new citrus highball. The whisky giant has created yet another brand profoundly under the name Suntory Stones Bar, which sports the iconic trademark of the Rolling Stones band with an adorning slogan – The Rolling Stones are the greatest Rock “N” Roll band in the world. This lemon and lime highball has an ABV of only 4% compared to your average canned highball of 9%, a possible indication that the brand is intended to capture the audience of drinkers new to whisky. This is the ninetieth canned dram to hit the shelves (on last count), and this may sound repetitive, and in actual fact it is, as I often find myself making people aware about these drinks, but one can only continue to guess at the flavours and themes to come. Are these canned drams a sacrilege or a refreshing summer alternative?
Posted by - Clint A at 3:04 PM 10 comments: 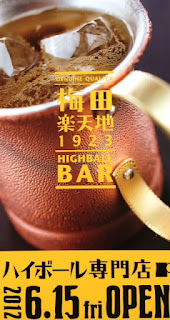 The opening of Umeda's second Highball Bar, June 15, certainly indicates that there is still a thriving market for the highly consumed concoction. Just like the original Umeda 1923 Highball Bar, the newly opened bar offers the "my mug" concept in which you fork out an initial cost for your own copper mug that is left at the bar awaiting your next visit. From there on every highball ordered comes with a discount, an incentive so to speak. Besides the relaxing atmosphere and decently designed interior (portrays a typical whisky bar), perhaps one of the best things about these chain bars which appear to be sprouting up all over the place is they do sell drams neat (only from Suntory's portfolio) at a reasonable price, however, there is the unwelcome cover charge of 300 yen, which isn't too bad given the offer of all you can eat snacks. The Umeda Rakutenchi 1923 Highball Bar is possibly one of the easiest drinking establishments to find, that is to say if you are familiar with Umeda. It's situated on the right-hand side of the front entrance of Hep Five, the big red building (department store) with the Ferris wheel on top.
Posted by - Clint A at 7:37 PM No comments: 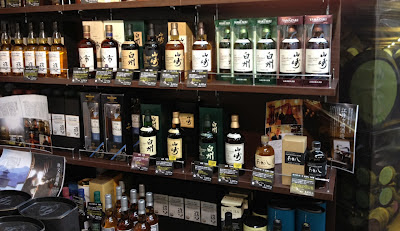 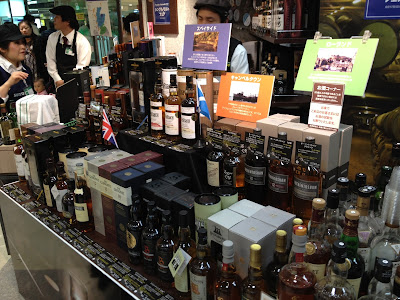 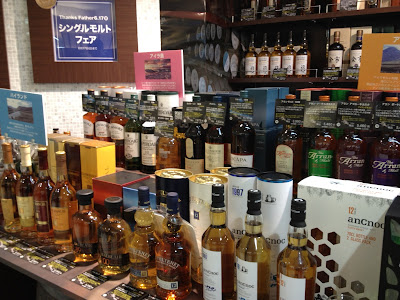 If you're looking to buy a unique whisky, consider heading into the Umeda Hanshin department store sooner rather than later. Until June 17, a massive selection of premium Scotch and Japanese whiskies are on offer, to not only purchase but to sample free of charge. Just as last year, a reasonably large space has been cleared to make way for the department store's annual Father's Day celebrations, and in case you're wondering, for reasons not known, Father's Day peculiarly falls on June 17, in this part of the world. Compared to last years line-up the selection of Japanese whiskies is not all that exciting in my opinion, unfortunately no malts from Ichiro's Card Series or any other expressions from Hanyu can be had. However, for those who have not yet had the opportunity to coat your mouth with Suntory's recently introduced no-age-statements than now is the time to do so courtesy of Hanshin. Besides the full line-up of standard bottlings (10,12,18-year-olds/Puncheon/Bourbon) of Yamazaki and Hakushu, the only other available Japanese malts include favourites such as the 10 and 12-year-old Yoichi, and a reasonable offering of Chichibu's The Floor Malted (at least 15 bottles), which I believe is the second batch. Perhaps the bottle of most interest, in terms of Japanese whisky, is Eigashima's 14-year-old (5-year-old also available). This bottling is retailing for 8,400 yen, unfortunately out of an array of expressions available for tasting this was one of few that was excluded for tasting.
Scotch enthusiasts have it made, certainly a very interesting range available with many gems on offer. Whether you’re looking for either Scotch or Japanese whisky, there is a relatively good smorgasbord of expressions to suit everyone's palate, whether it is for yourself, or in the case of this event, your father. These tasting sessions are very welcome, not only do you have an interesting selection to choose from; you get to try before you buy. I'm in favour of this, something that should be available more often as it helps with decision making. Enjoy.
Posted by - Clint A at 1:41 PM No comments:

Not often do whisky enthusiasts of have the pleasure of having a whisky festival in their own backyard, usually a journey to the Kanto region is needed. Luckily for residents of Kansai, you only need to travel to Umeda, for an up coming event. In collaboration with the Scotch Whisky Research Center, Whisky World will be throwing Whisky Festival 2012 on Sunday, July 15, at the OMM (Osaka Merchandise Mart) building. The event will start at 11:00am and wrap up at 6:00pm according to promoters. Advanced tickets can be had at a reasonable price of 3,000 yen or 4,000 yen on the day. There is going to be a great line-up of availability, brands, and choice (over 30 stalls). For those with a passion for Japanese whisky will be interested to know Sake Shop Sato will have a booth at the event, so be sure to see an adequate selection of Ichiro's Malts. Besides the standard scheduling of the day, which includes seminars and what not, a free market (strictly whisky) will run during the festivities. Booths, which are relatively small in size, are available for the day at the rate of 5,000 yen, for those who wish to unload any unwanted whisky from collections. I will be heading in and making a day of it. See you there.
Info 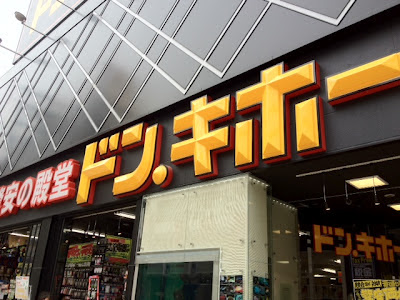 The fairly recent face lift of Umeda's Don Quijote brings hope to whisky drinkers of Osaka, especially to those who are looking for affordable and reasonable whiskies, in particular Japanese whiskies. Sure, there a three large department store chains in Umeda that stock, at times, some amazing bottlings, but these come at a price, which may be out of reach for your average resident. The vamped up, conveniently located store stocks a decent selection of mid-range Japanese whiskies on the second floor. Expressions such as Nikka's Pure Malt (Black/Red), Yoichi and Miyagikyo, as well as Mars' 3&7 and Amber blends can be seen. Perhaps the stand outs, besides your standard Yamazaki and Hakushu bottlings are the 8-year-old Golden Horse and the Mars Maltage 10-year-old "Komagatake". A small selection but nevertheless well worth a look if you’re in the market for a bottle to be consumed sooner rather than latter and while there explore the weird and quirky novelties on offer. 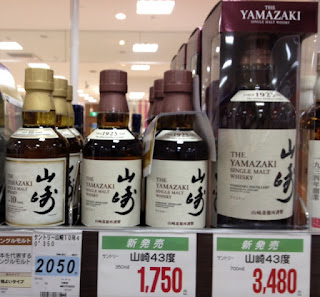 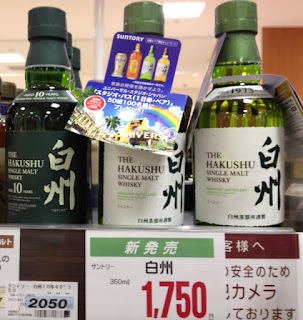 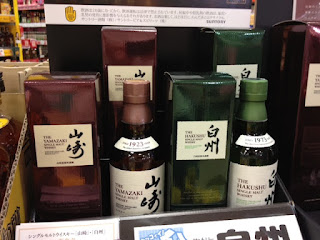 Certainly nothing new in terms of debut and it even appears many knew of or even predicted that Suntory's portfolio in 2012 would eventually include two more malts well before advertisement and press releases came to light. May 29, saw the launch of the Yamazaki and Hakushu no-age-statement bottlings, which recently has been talk of the town regarding price and age speculation. The arrival of the new additions comes with a reasonable, good looking, new package and colour scheme thanks to the marketing department over at Suntory. The presentation of the Hakushu no-age-statement is that if a metallic army green plastic capsule while Yamazaki's is metallic maroon like.
Both the 350ml and 700ml bottlings have presentation cartons but it appears supermarkets, in particular, are not providing the option with the smaller version due to space restrictions. The 700ml bottlings come in a relatively straight forward clear carton, however it is the 350ml bottlings that win hands down in the design department, and it’s all that metallic colouring in my opinion. At the end of the day though it’s what's inside the bottle that counts. Currently the no-age expressions are retailing at the Daie supermarket, on special, at 1,750 yen for the 350ml (Co-op 1,800 yen) compared to the 10-year-old expressions which retail at an extra 300 yen (2,050 yen). For the 700ml no-age bottlings the going price, again at Daie, is retailing at 3,480 yen (Co-op 3,600 yen) compared to 10-year-olds which are on average 3,780 yen, again a difference of 300 yen.
Posted by - Clint A at 8:40 PM No comments: Shukugawa: the river that hosts many cherry blossom viewing parties during the season. With an abundance of Sakura trees, which encrust the river, this particular setting is very significant for many for various reasons. For whisky consumers the significance lays within the Hankyu Shukugawa station. It is here, right on the platform itself, a Seijoishi store is plonked accordingly. Nothing can really be as convenient as this location. If you are on the Hankyu line and catching the train between and than consider getting off to shop at Shukugawa station. This Seijoishi store is possibly the best I've seen so far in terms of Japanese whiskies.

There is nothing overly special in terms of limited bottlings, however it's the convenience and what you can get, if in a hurry and not heading all the way into Umeda. Besides the standard line-up of Hakushu, Yamazaki, and Taketsuru, the store stocks some interesting blends including Mars' 3&7, you can also get Nikka's Pure Malt Black and Red expressions, as well as a few standard bottlings of Ichiro's Malts, and a few gems, including Mars' 10-year-old the "Komagatake". Of course this may change at any given time due to purchase but in any event if you’re in the area it's worth taking a look.