Nose: Handsome. Whiffs of subtle smoke and mild mulch qualities: putrefying leaves and bark. However, there is also a sweet fragrant cut grass quality. There are suggestions of citrus: subdued lemon but more so watery mandarin. Vanilla plays a part in mid-ground: boiled confectionary. Earthy notes are emphasized with time - that is if you can resist.

Taste: Crisp and moderately creamy (pure cream/pouring cream and not whipped or thickened cream). As with the nose there is subtle, faint smoke, which rolls of the back of your tongue. Very soft spices play happily amongst the vanilla. All in all the palate is consistent with the nose. Streamlined oak is evident with time and the citrus turns from a shy lemon to dried kumquat. Suggestions of nut are present: borderline macadamia and/or cashew.

Finish: Soft oak and moderate with trademark soft vanilla and spice. A tiny hint of that nutty presence rolls of the last wave.

Comment: The 2011 bottling of the Hakushu 12-yo is perhaps the best batch variation in terms of personal preference. I found citrus to be less present this time around compared to older batches. Water is not needed in my opinion. Happy to include this bottle amongst the few I cracked for the festive season, it has plays all the right tunes. 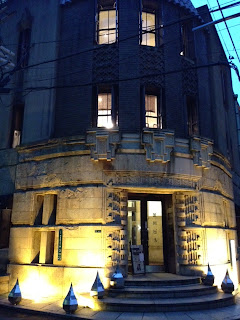 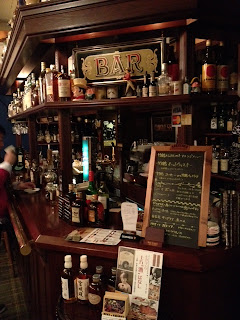 The Court: a whisky bar of antiquity and as far as I know home to one of Kansai's largest collections of Nikka paraphernalia. The establishment, which has all the trimmings of a typical old Scottish watering hole is a Taketsuru ambassador and pays homage to the Nikka brand. Yoichi and Miyagikyo connoisseurs will be spoilt for choice at The Court. Not only does the bar offer an interesting selection of past and present bottlings of Nikka for you to savor in nostalgic and yesteryear surroundings, the establishment also have their own in-house mini Nikka museum one floor below the bar (a must see - by appointment only). The floor to ceiling historical and chunky, but petite bar counter also adorns an array of Nikka memorabilia, certainly an environment you could spend a lot of time in over a dram or two. It's not often you find a place with in modern of such description that you can confidently call a home away from home. Whiskies R Us is happy to write the first English introduction on this hidden gem and recommends all readers in to pop in.

My time at The Court however was spent in the adjacent room that equally transcends you back in time. Wooden floor boards, white washed walls, lots more Nikka goodies, rustic interior, and a lovely old fashioned cast iron oil heater that radiated warmth for the evenings tastings: SMWS (Scotch Malt Whisky Society) Nikka bottlings. The gathering was certainly nothing formal, which I quite liked. Basically a bunch of down to earth guys and girls who share the enthusiasm of Japanese whisky and interest in the society bottles, which were sourced by one of the attendees for the tasting. The relaxed and casual evening was certainly appreciated as it gave unlimited time to spend on each of the three Nikka expressions, perhaps a bit too much time as my pen didn't make contact to paper as much as it should have as I was too carried away with talking about other things - purely conversing about whisky of course. My thoughts on the evenings single casks:

[124.3] Miyagikyo 13-years-old (1999) - ABV: 61.9 - refill butt: Great balance, fresh and creamy malt. Right of the bat pineapple life savers (pineapple lollies/candy) emerges on both the nose and palate. A hint of tatami mats, white compound chocolate and Arnott's milk coffee biscuits make their way to the surface. Fruit is certainly there: a home made fruit salad with banana and whiffs of kiwi fruit. With the addition of water the pineapple becomes extremely dominant but in an artificial form, again, a very pleasant attack of pineapple candy. This Miyakigyo carried an appreciative light body with some interesting hidden aromas and tastes: camembert cheese on the nose and a touch of dried kelp (Kombu).

[116.18] Yoichi 18-years-old (1994) - ABV: 64.4% - refill butt: Lovely stuff and my nomination out of the three siblings. On the nose sweet notes: old fashioned cologne and pipe tobacco automatically emerge followed by a burst of melon soda with a dollop of ice cream (creaming soda). Fruit is evident but not in a fresh form, banana yes, but in gum tablets. Complex stuff involving melted butter and glazed milk chocolate apricots. Water brings out pepper and whiffs of tyre smoke. The palate is bitter and tingling and takes a few traits from the nose but fruit is much more representative with mango tinges. This is handsome stuff.

[116.17] Yoichi 25-years-old (1987) - ABV: 59.2% - virgin oak butt: Possibly the best balance out of the three expressions, but in my opinion it lacks in character in comparison to its siblings. There were some lovely notes that came out of this but it was a hard malt to find any distinctive personality. Perhaps it was a factor of being the third in but I was hoping for a bit more. However, lovely homemade Japanese plum liqueur (Umeshu) rolled of the surface along with cream confectionary. There is a touch of glue on the nose: envelope glue, which transfers to the palate at a later stage. With water a salty, rich, caramel soft candy shows its face intertwining amongst some chamomile tea.

To conclude my favourite out of the three expressions was the Yoichi 18-year-old. Although all three expressions were beautiful in their own way the 18-yo won my vote on its expressive nose and palate. Exciting times for enthusiasts of Japanese whisky, let's all look forward to the flourish of new bottlings to come in 2013.

Nose: Juvenile but mature. Roller coaster complexity for a 3-yo: rolls from sweet to savory, followed by earthy aromas then back to sweetness. Lovely crisp wood, rich fresh pot-puri mix: vanilla, sandalwood, and a whiff of white rose (florally). Fresh baked caramel waffles, butterscotch, and candy floss fade in and out between fresh non-flavoured pop corn. Earthy elements follow: wet moss rock and musty warehouse. Darting out of the corners a slight varnish and rich Earl Grey milk tea. Water brings out lemon spice and fruit: plum and ripe permission.

Taste: Youth is a bit present on the palate but sensational stuff. Wood spice and a hint of anise roam. As with the nose tea is present only on the palate it's hot honey and lemon. Water makes this malt sparkle; without it you rob yourself of pleasantries: plum, over ripe permission, powdered sugar coloured pop corn, nougat, and hints of marzipan.

Comment: There is a reason why I ordered this. As mentioned I don't often give in to private bottlings, they have to really push my buttons; the Shinanoya private cask Chichibu Chibidaru did just that. The nose is a winner. It amazed me being so aromatic for the age. When I tried the prototype at Whisky History the bottle was at quarter level, and it was that good I had to order two, so I can only presume the above notes will change as the bottle decreases. Lovely as it is but I can see this becoming greater. For an alternate review take a look over at Connosr - interesting introduction by Pierre W. 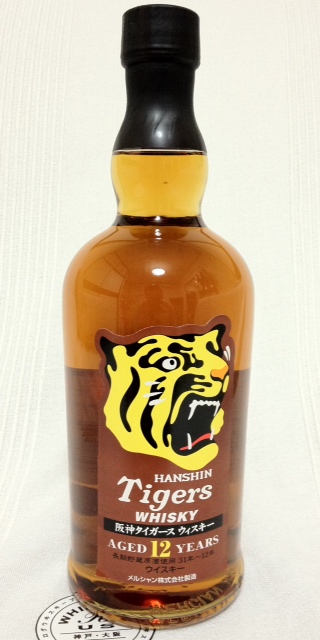 Nose: Distinctly 12-yo OB Karuizawa. I find when many of the ’s are initially opened there is a massive citrus aroma that engulfs your nose, which is the case here. Orange and lemon sherbet, fresh Sunkist orange zest, orange gelatin crystals, and a slight freshly squeezed Yuuzu aroma poke through. This lovely citrus however, in my opinion fades with time and becomes less aromatic as the bottle decreases. Of the bat lovely stewed apricots and trifle like qualities (dry sherry, custard, jam rolls). In given time sweetness develops: toffee and maple syrup. Lurking are chocolate roasted coffee beans, pine, and wood varnish. This is arguably a very complex Mercian release.

Taste: Thin and light, a tad watery but once past this everything positive arrives: sherry wood spice and raw button mushrooms. Beer nut skins, caramel topping, and tinned apricots mingle with a slight sulphur note. In given time a distinguishable molded rubber reveals itself, or is it a faint firework smoke?

Finish: Dry, pulls up a bit short but pleasant. Sherry wood spice and burnt toffee, with a tinny like taste (liking the inside of an empty apricot tin).

Comment: Although some of the notes may not sound that spectacular I actually find this bottling very pleasant. The citrus is amazingly dominant on the nose when first cracked, I presume this will all change as is did with the official OB 12-yo I reviewed a while back (which fell apart half way through). There is certainly a difference between the two bottles. Glad to have a couple of these in my stash which I stumbled across a short while back.

Tales of Brewing and Distilling Craftsmanship 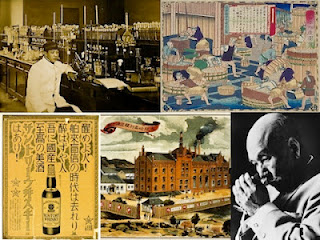 To celebrate the 10th museum anniversary of , an exhibition on the history and manufacturing of Japanese alcohol will run until January 19. The museum's 15th exhibition looks at the brewing and distilling innovation of Japanese pioneers in the beer, sake, and whisky industry (past and present), particularly those from the Kansai region. On Saturday, January 12, a special seminar will take place focusing purely on Japanese whisky and the man behind it all: Masataka Taketsuru (up to 30 attendees). Admission is free.


Image borrowed from the Museum of Osaka University

Born in Sydney, residing in Brisbane, Australia Brian “aka Damtastic” needs no introduction to enthusiasts on the whisky circuit. Nevertheless, he is a well-known contributor to a number of whisky forums. His passion for Japanese whisky is evident through his tastings that are set about with precision; he describes flavours he encounters in detail, modestly, and in plain mouthwatering language. Brian’s experience and enthusiasm for locally distilled whisky in Japan is invaluable.

This dedication, which Brian himself labels as “a hobby” has led to the natural progression of creating his own site The Japanese Whisky Review that will focus on what he does best: a broad range of Japanese whisky reviews, which I recommend heartily to all Whiskies R Us readers. The Japanese Whisky Review can be found under "Reviews by Dramtastic" on the side bar.
Posted by - Clint A at 3:20 PM No comments: