Taste: Sandalwood, wild berry and exotic spices (Sumac) are at the forefront. Tickling the tongue from here on is mulberry with roasted pine nuts and mild mint sauté. Bel Ami tea with a smidgen of Red Gum honey. Do I detect a fusion of strawberries and Wasabi? Wandering spices are continuiously in play with peppered almonds and Cassis mustard. With water and time grilled Shiso leaf and aromatic wood (berry and sandalwood). Mellow hints of licorice. The addition of extra water adds sweet coffee beans and balsamic vinegar over fried tomato (in a welcoming way). Longer exposure in the glass provides various experiences.

Finish: Peppered almonds and Cassis mustard. Quite moderate and prickly with a playful bitterness of tea leaves and spicy honey.

Comment: This malt truly gets better and better as you get close and personal with it. Like most malts don't go by your first impression, wait until you get into your 3rd or 4th dram - patience prevails. It is forever changing with the influence of all those different cask types involved (see here).
Posted by - Clint A at 12:42 PM 6 comments: 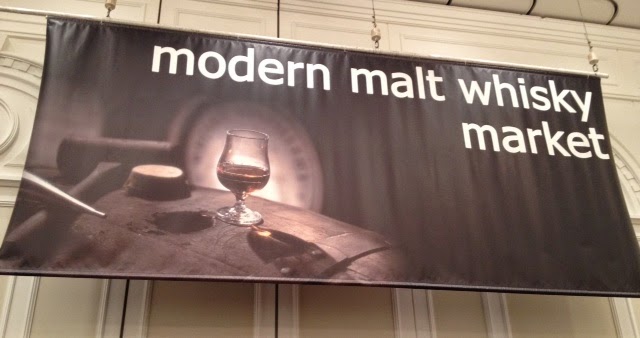 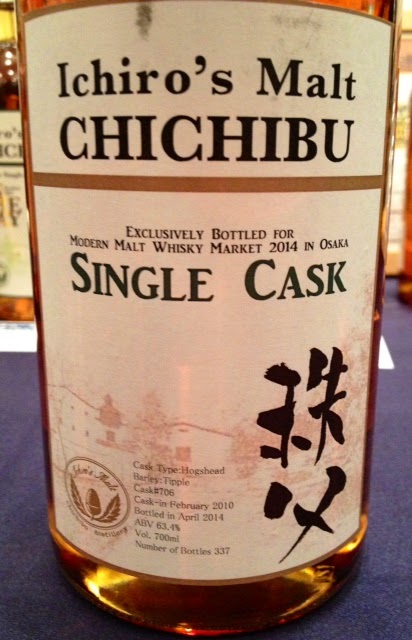 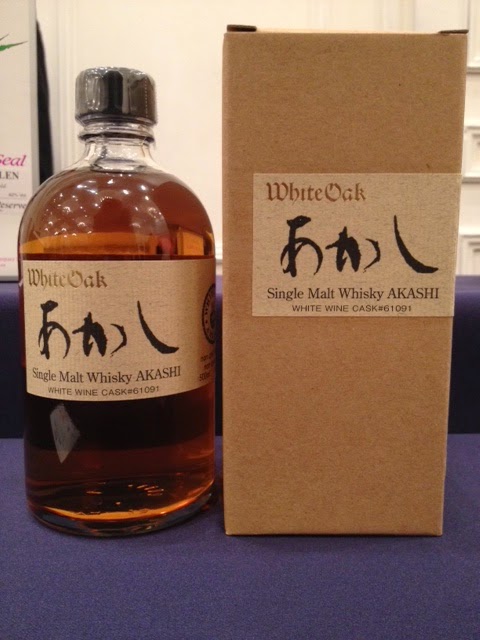 Quite a few enthusiasts flocked to one of Osaka's savvy hotels recently to sample some of the best whiskies around right now. The Dojima Hotel welcomed the 6th 'Modern Malt Whisky Market in Osaka' on Thursday 17, 2014 - an annual event that is put on by Sanyo-Busan. The event, which is naturally also held in Tokyo, appeals to men and women from all walks of life. A variety of both Scotch and Japanese whiskies were available at hand that provided a good whisky experience. The gathering (which I must admit was a first for me) gave attendees the opportunity to sample some great whiskies (without any additional costs) while rubbing shoulders with people behind the brands, but most importantly it gave friends and acquaintances the chance to mingle together and discuss what's going on in the whisky scene today.

Personal highlights was the opportunity to sample Venture Whisky's Chichibu single cask exclusively bottled for 'Modern Malt'. Cask# 706 (Hogshead) was seasoned with peated genshu in 2009 for a short time, then emptied, and refilled in 2010 with new make distilled from Tipple barley. The cask produced an outturn of 337 bottles, and the allotment on the day sold out quick, as expected, however I do suspect this single cask to pop up in very small quantities at a few given retail establishments - bottled at 63.4%.

Naturally the spotlight was on both Joker's but the extremely small order allotment sold out in minutes - according to the promoters punters lined-up from as early as 7:00am to get the chance to make a purchase. Also drawing attention was yet another Eigashima Akashi, a 4yo that was matured in a white wine, re-charred, 2nd-fill hogshead (Cask# 61091) sourced from a Yamanashi winery. This cask produced an outturn of 400 bottles with only a small amount available on the day for order therefore, I presume this will sprout up sooner or later for retail - 54% abv.

In the Scotch whisky category everyone had their own favourites. I favoured a stunning 35yo Tomatin Cadenhead small batch (1978 vintage), exclusively for Japan, as well as Kilhoman's 2014 edition Loch Gorm - ex-sherry cask matured release. A good day out with impressive seminars. Keep your eyes out for a beautiful expression from Carn Mor - 1989 Glenrothes Sherry Cask.
Posted by - Clint A at 12:39 PM 2 comments: 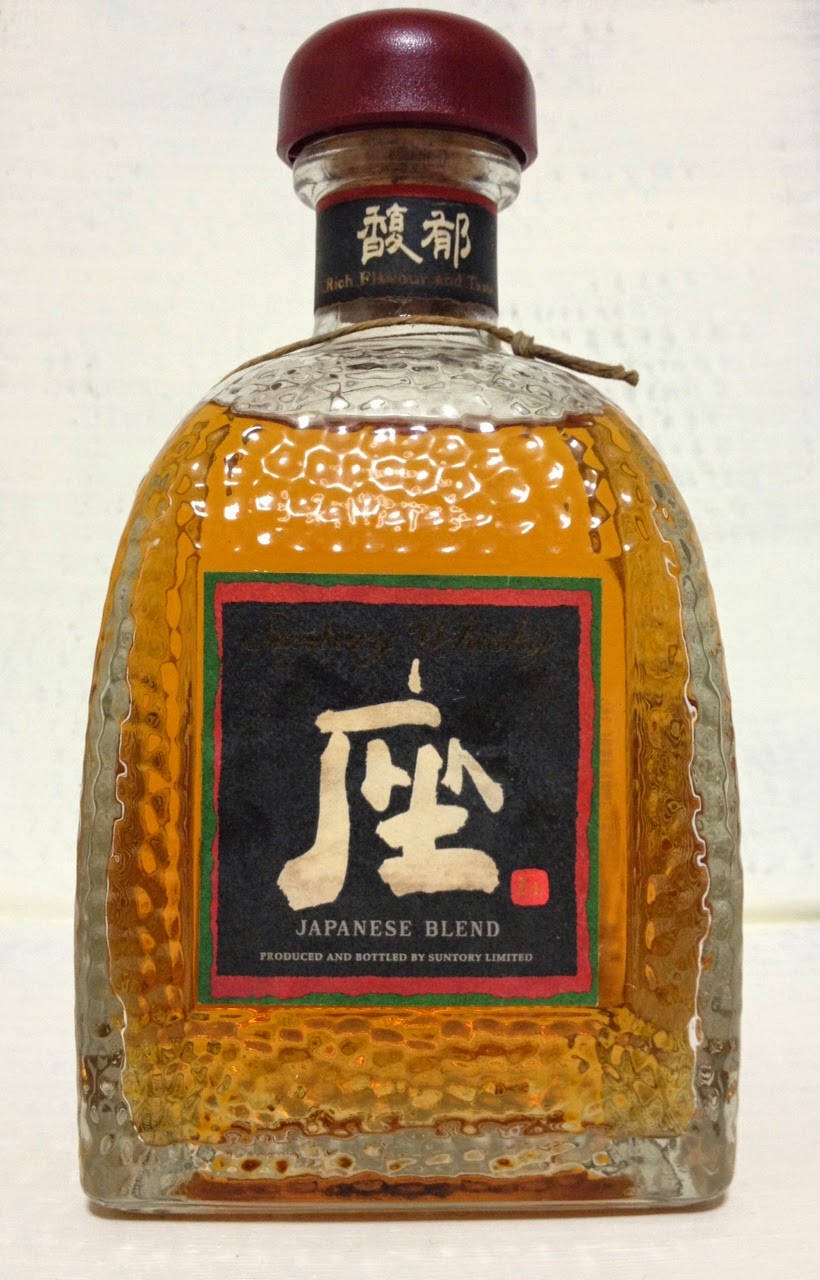 Suntory released the blended whisky "Za" to the market on September 5th, 2000. The blend was the concoction of Suntory's now chief blender Seiichi Koshimizu, and was promoted as being a "whisky made to accompany Japanese-style meals". According to Suntory the blend however never really took off and was a slight check in progress for the now renowned chief blender. There is further insight into the naming and bottle design in the original Japanese press release here.

Nose: Odd and peculiar initially with overpowering aromas of baked white fish meat. In fact it carries an association of the sea in general in a moderate way: soft dried kelp and mellow hints of brine. This subdues after a handful of minutes (luckily, as I'm not keen on the fishy note). Things change direction ceremoniously with old tatami mats, pickled onions, celery, and peeled whole potatoes - guess you could say it is quite vegetal. Best left to sit for 10-15 minutes if you can be patient (I'm sure you can) as it will take the edge of things then, lovely cedar begins to break through - Japanese cedar bathtubs.

Finish: Mild pepper on celery with a slight bitter note of grapefruit.

Comment: You'll either enjoy it or not. I must say however, it is actually half descent as a highball. There are extra flavours coming out with the help of carbonated water. I can't help but wonder if the shape, packaging, and brand name diminished this blend? Nevertheless, a good historical experience.
Posted by - Clint A at 1:02 PM 2 comments: 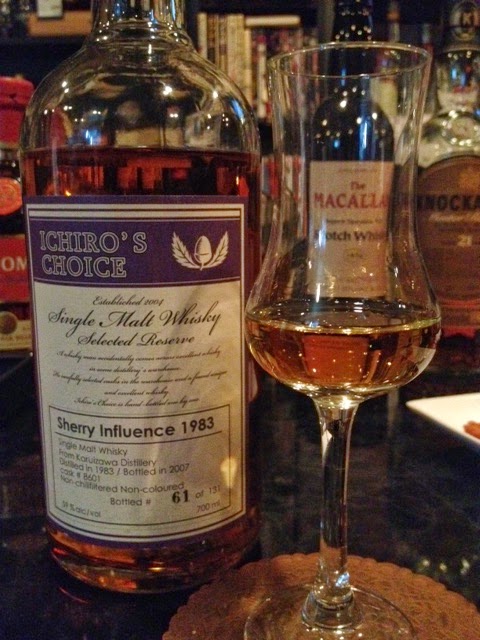 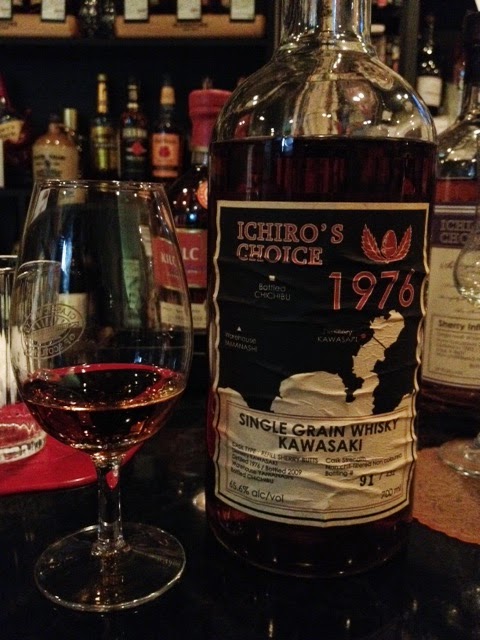 Update: April 28th, 2014
I have just learnt that the entire area where Bar Zumon is located will be demolished to make way for a "new town". Therefore, the building that houses the establishment will also be knocked down. This bad news means that Bar Zumon will no longer be open from May, 2014 however, the good news is the owner is currently looking for a new premises to re-open. Whiskies R Us will be report on the new location once everything has been finalized, and the bar is up and running.


Bar Zumon is advertised as a "Darts Bar". Sure, there is one electronic dart board in the place, but this dated piece of machinery gets overlooked on arrival. If the truth be told most people wouldn't notice it - everything but the dart board is just too overwhelming as soon as you step foot in the door. To be critical, the bar shouldn't associate itself with the game and there is good reason.

One thing you quickly learn about this bar is the emphasis on their malt selection rather then on interior. It is safe to say the bar has a no-frills service in terms of decor, but patrons are offered something much more than an exquisite layout. Bar Zumon boasts an enormous selection of whiskies with a heavy focus on Scotch independent bottlers. Literally it is "spot the official bottling", which is fair to say quite unique in any establishment. There are rare independent whiskies everywhere (hundreds), from floor to ceiling, a haven for any aficionado. Someone there has an affection for vintage bottlings and Glen Grant.

Now, it wouldn't be right if I did not mention what is available on the domestic whisky side of things. Here, it's about quality and not quantity. Again, no official bottlings (well not that I saw), and although Bar Zumon has only around three dozen bottles the selection has been carefully chosen. The line-up includes single casks from Karuizawa, Yoichi, Yamazaki, Kawasaki, Mars, and Akashi, as well as Chichibu and Hibiki special releases. Naturally, if you only want to induldge in Japanese whiskies, you can get quantity elsewhere, but if it is exploration you want then take the adventure. Good news is, if there is further interest on Japanese whisky, the bar master - Izumoto-san, will be happy to increase the current selection.

Laying Down Your Cards - Hanyu The Jokers 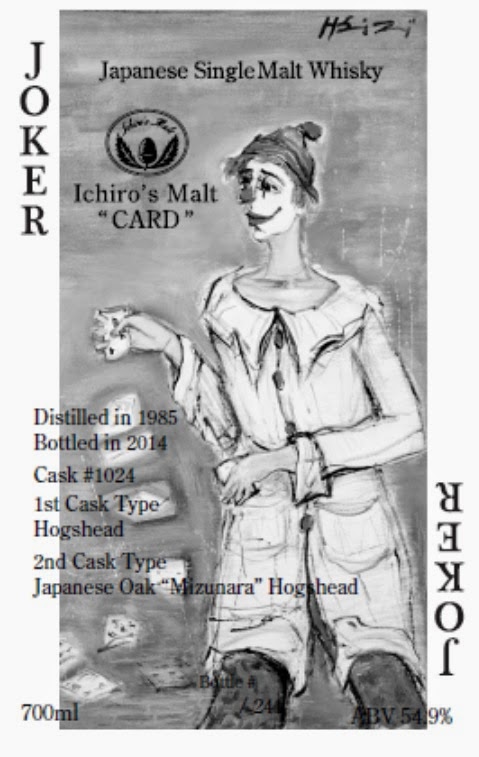 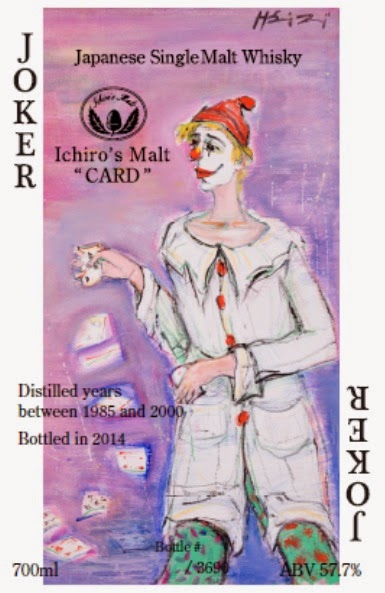 The final cards of the deck are in play. The long awaited Jokers of Akuto Ichiro's "Card Series" are finally out - the last remaining cards of the whisky series that has gained cult status world wide. The patiently awaited Jokers are naturally very limited (well at least one Joker is in terms of outturn) and will be in very high demand. For quite some time there was a lot of speculation as to when the Jokers would be released and whether or not there would in fact actually be two versions of the Joker to complete the famed series (colour /black & white). Yesterday, Venture Whisky sent an email to their distributors revealing what many of you already knew - information has been circulating on the net for some time. The colour version of the Joker is a vatting of 6 vintages from 1985 through to the final Hanyu vintage of 2000 (cask types: sherry butt, puncheon, hogshead, cognac, chibidaru, maderia hogshead, and bourbon). This tasty sounding vatting has produced an outturn of 3,690 bottles and is bottled at 57.7% abv. The second Joker in black, white, and shades of grey however is a single cask with a release of 241 bottles from 1985 (cask# 1024), bottled at 54.9%, and finished in a Mizunara hogshead. Prices will naturally differ depending on the retailer but the suggested retail price for the colour Joker is 14,000 yen (excluding tax), while the single cask Joker has a recommended retail price of 36,000 yen (excluding tax). At this stage it is not clear when the Jokers will officially be sent out from Chichibu therefore, as to when they will hit the shelves all depends. Although this is extremely exciting news for fans alike, some hardcore enthusiasts of the "Card Series" have expressed both happiness and sadness, the former for obvious reasons, but its the later which has become the new topic of discussion. For many the final "Cards" mark the end of an entertaining era, an era in which some have been there from the beginning right to the end (painstakingly accumulating each and every card). While some take the news sadly others seem to embrace the final expressions (Jokers) in the series as it opens doors to new possibilities, themes perhaps (naturally depending on the small amount of casks left, and what Akuto-san plans to do with them). Wouldn't it be good to see one last injection/fix - additional releases to the "Card Series"? A release along the lines of say the "Playing Series" - Royal Flush, Full House, Black Jack etc etc. Perhaps I'm living in a fantasy world!

Whiskies R Us review of the the colour Joker can be viewed (here).
Posted by - Clint A at 11:48 AM 7 comments: