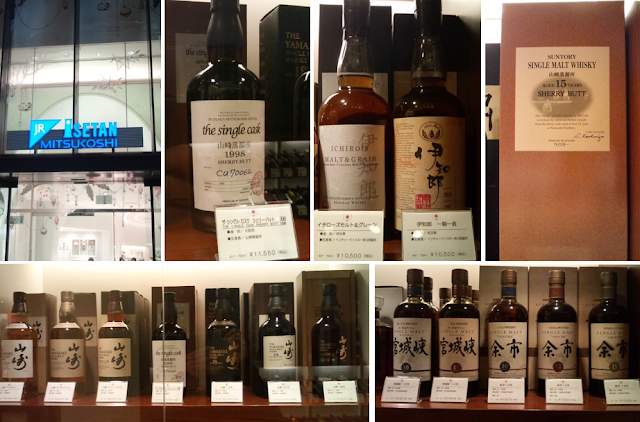 Although the debut of the new Isetan Mitsukoshi department store at JR Osaka station was some time ago, the commodity of the store, and it is an impressive one by all means, has not worn off. Months after the opening of this grand store, shoppers still flock to it as if it opened yesterday. The ritzy architecture and design of the building that is embedded in the station is quite attractive, but the major attraction is the quality and variety of products the department store stocks, in particular Japanese whisky.

Umeda, Osaka is home to three other department stores within a close proximity which also stock a variety of whisky, surprisingly Scotch mainly, but none of these department stores stand out as much as Isetan. Isetan is in fact quite the opposite, very little Scotch is stocked, and the emphasis is on top quality Japanese whisky that I’m sure all readers of Whiskies R Us will be appreciative of. This is certainly good news and suggests that there is a demand for Japanese whisky amongst local shoppers, that or Isetan have chosen the premium selection specially for foreign clientele.

Being a luxurious department store and stocking hi-end products, whiskies are priced accordingly. So if you were in the market for budget Japanese whiskies it may pay to consider alternatives, but on the other hand if you were in the market for something special and prepared to splash out a bit, then this is the place to go. Either way this store is a must visit regardless. On my visit over the weekend I came across two malt expressions from Ichiro that I have never seen before, enquiring about the selection staff proudly informed me that they stock exclusive bottlings limited to Isetan that are not available elsewhere. Unfortunately I cannot say whether this is factual but what I can say is that some of the expressions I saw when I was there I have never seen before. There is no particular given name for the alcohol shop but head down to basement two and head to the wine and alcohol section in the far right back corner.

Update: December 19, Brian (aka Dramtastic - Nonjatta reviewer) has kindly made me aware within minutes of posting that both of the malts distilled and blended by Akuto-san in the photo above can be purchased at the Takashimaya department store in Tokyo. I have taken a look in the Shinsaibashi (Osaka) Takashimya store a while back (which I will posting soon about) but unfortunately didn't see them. Although the staff at Isetan suggested that the bottles were exclusive to the department store, it appears that they were of the belief the bottlings are exclusive. Thanks Brian.